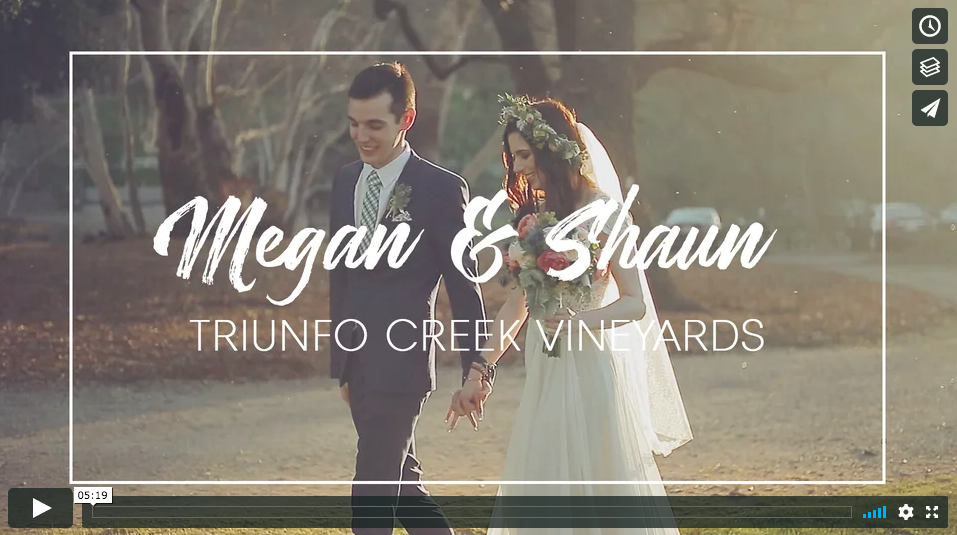 The elegant simplicity of this boho vineyard inspired wedding is absolutely gorgeous! With the romantic settings of Triunfo Creek Vineyards, Megan & Shaun painted a perfect picture of love. From their quirky and cute beginnings in drama class to their undeniable love for one another, this wedding gave us all kinds of butterflies!

Here’s their love story: “Shaun & I met in the Fall of 2008 at Florida State University in Tallahassee, FL. We were both in the Theatre program there & ended up having a lot of the same classes–the one we met in was Acting. The first few classes we spent playing a lot of “Getting to Know You” games & I distinctly remember this one time when we were all sitting in a circle & noticed Shaun looking at me from across the circle. Instead of looking away & pretending like he wasn’t looking, he winked. I went back to my dorm after class that day & told my roommates about “this guy in my class who thinks he’s SO smooth…”. The first time we hung out outside of class was at a watch party for the premiere of a new season of The Office. I lived in the dorm where we were planning to watch the show, so after class Shaun walked up to me, put his cellphone in my hand & said, “Put your number in.” I immediately was like, “Why?” & he said, “Well, don’t you live in the dorm that the watch party is happening tonight? I need to have someone’s number to get let in.” This made perfect sense & so I put in my number. Throughout the day, Shaun texts me asking me who I’m planning on dressing up as for the watch party. (We had all decided to dress up as different characters from The Office.) I told him that I was planning on going as Pam & he texted back, “That’s so funny, I was planning on going as Jim!” Unbeknownst to me, Shaun had never watched The Office before. He had heard of it, but had never watched it–so when I texted that I was going as Pam he had looked up The Office & the character & saw that Pam & Jim were love interests, so he decided to go to the party as Jim. (There are pictures of us from that party dressed as Jim & Pam…it’s pretty adorable now looking back!) After this, Shaun & I started hanging out a lot as friends but very quickly realized that we just “clicked”. It may sound cliche, but we really are best friends–from the very beginning we would spend hours talking & laughing. As we got to know each other, we realized how many times we had actually been in the same place at the same time before officially meeting in Acting class. Since we both grew up in Florida & were involved in theatre, we were actually at the same Florida State Thespian Competition in Tampa in both 2007 & 2008–I actually saw Shaun perform in a Small Group Musical number (before I knew who he was) with my Maid of Honor! We crossed paths again without realizing it in the Summer of 2008 in an Astronomy class at Florida State University; a guy came into class wearing this ridiculous sweatshirt & I made a joke about it. I connected the dots when Shaun wore that same sweatshirt when we were hanging out in the Fall of 2008 & I asked him if he had been in that class. By the time we officially started dating in April 2009, everyone who knew us reacted the same way–“Finally!” Admittedly, Shaun & I were falling in love with each other months before we officially started dating. I remember telling a friend before Thanksgiving Break in 2008, “If I ever get the chance to date, Shaun, I’m gonna marry him. I can just feel it.” Thankfully she didn’t tell him that then, because I think he probably would have run far, far away–but over 8 years later I look back on that moment & realize that I knew, even then.”

We hope you enjoyed Megan and Shaun’s Triunfo Creek Vineyards wedding.  If you are in search of elopement packages, we offer that too.  And we love it!  It’s intimate and personal and we are always up for a new adventure.  Whether your dream elopement is between you and your soulmate or shared with your loved ones, we can stream it live!  Come visit our Elysium Productions elopement wedding page, click here.